Join Ms. Christie-Blick off the coast of South Africa as she researches one of the top predators of the ocean – Great White Sharks. Continue reading below…. 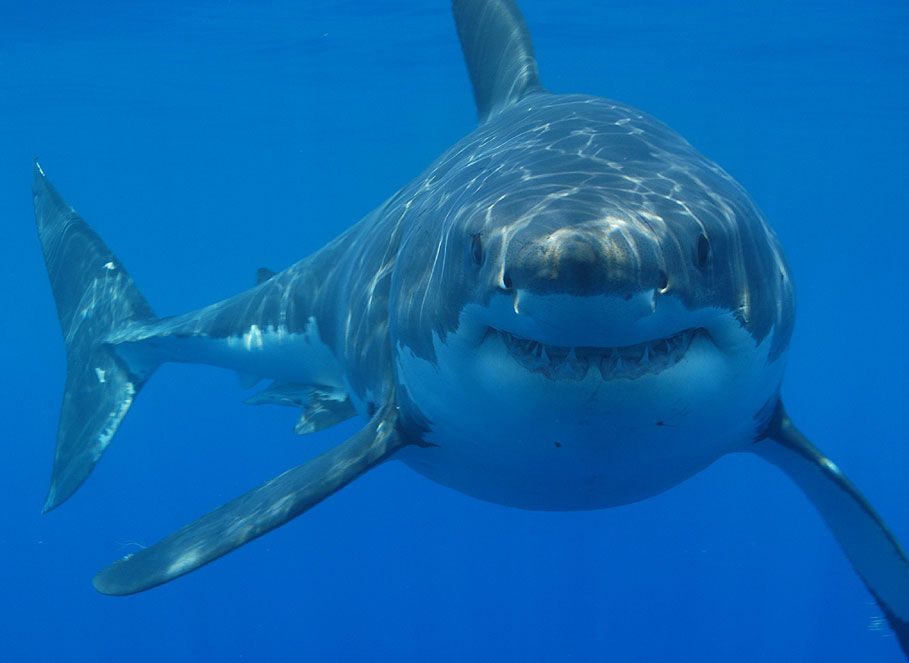 A wetsuit is made out of rubber. It helps keep you warm in the water.

He glided swiftly, silently, steadily, through the murky water, where the Atlantic and Indian Oceans meet at the tip of Africa. I was in the water. I couldn’t see the dorsal fin moving toward me, slicing through the choppy waves with ease. The bright rays of morning sunlight slashed through the ocean’s surface, making it difficult to see. I was unaware of the giant jaws and razor sharp teeth moving in my direction until I heard the yelling. “Dive down!” yelled the captain. I took a quick breath as my heart began to race. I followed his command, and submerged my head into the icy water. A Great White Shark heads toward the seal decoy just beyond the cage.

I was cage diving in shark-infested water – not just any shark – this is the habitat of the Great White Shark. Some think it’s crazy to get near them. After all, there have been several cases of sharks eating humans in this area. That’s why I was in a cage. Great White Sharks are beautiful, powerful, fascinating creatures. They are not evil, but they are very curious. If they see a body splashing around in the water, they might very well take a bite to see if it’s tasty. After one bite of a human, they usually leave it. It’s just not as yummy as a seal. But that’s little consolation for the person who has just become an appetizer. Our boat for the marine safari. Notice the cage at the back of the boat. It will soon be lowered into the water – for the people, not for the sharks!

Two weeks ago, I had posted information about the Great Whites on this blog. Click here to view the posting. It received so much attention from the Cottage Lane students that I thought I should do more research on these fascinating animals. Research doesn’t always mean reading books or googling information on the Web. Sometimes you have to get closer to the real facts.

Now I was getting what I had paid for – getting up close and personal with a top predator of the ocean. On the surface of the water, I watched the seal decoy bob in the waves. It was not a real seal. It was just material wrapped around a piece of foam. It’s thrown into the water to attract the sharks to the area around the boat. It looks like a tasty seal pup as the shark looks up from the ocean’s depths.

When I heard the captain yell, I dipped below the surface of the water. At first I could see only the small fish swimming in the sediment-filled water. A wind had kicked up the night before, stirring up sand and bits of debris. It was hard to see anything else until the large body of the shark was just a few meters away. He seemed to appear out of nowhere, but his destination was clear. He was headed for the seal decoy close to our cage. He knew what he wanted, and he was determined to get it. His streamlined body sliced through the water with ease.

About four meters long, he was more than twice my size, so I was grateful he was headed for the seal and not me. I was also glad I had the camera switched on. As he approached the fake seal, it was pulled into the boat so the shark wouldn’t grab it. He would have to continue his hunt for breakfast elsewhere. His life depended on it.

Watch this video to see what I saw while in the cage. The cage is lowered into the water to keep the people separate from the sharks. That’s me in the wetsuit, in the middle of the boat, getting ready to go in the cage. The pink belt has weights on it to help me sink down under water. I’m in the middle of the cage – a good place to be! View from inside the cage.

Back in the boat, I saw several more sharks swimming nearby, about a dozen in all. Some of them were younger and smaller, about three meters in length. One, an adult male, was about five meters long! Each was fascinating and exciting to watch. A seal decoy is not a real seal. It’s material wrapped around a piece of foam. A line is attached to it so it can be brought back to the boat.

When we were first approaching Seal Island, one of the crew members had thrown the seal decoy, attached to a rope, overboard. As we continued motoring, it did look like a seal swimming along. The captain told us to keep our eyes on the decoy, no matter what else was happening around us. It was hard not to look away when hearing the barking seals on the island, the screeching gulls, and the other unknown noises vying for my attention. But the captain was right. After a few minutes, in front of my very eyes, a shark’s large open mouth appeared from under the water. It grabbed the “seal” from underneath as it jumped out of the water, splashing back down and moving quickly out of sight before I had a chance to take a picture! The fishing line, attaching the fake seal to the boat snapped easily and it was gone. A moment later, the “seal” bobbed to the surface of the water again with new teeth marks, but no bite out of it. The crew brought it back on board to get it ready for its next outing.

At one point, I saw a hurt seal (a real seal) floating on the surface of the ocean. It was a sad sight to see. I felt so sorry for it. A few moments later, it was inside the mouth of a Great White! I was excited to the see the shark in action, sad to see the seal being eaten, and relieved that the seal’s difficult life was over – a lot of emotions to feel all at the same time! But it was a good reminder of the food web that ensures the balance of nature. The Great White Shark is an endangered species. I wonder how the ecosystem will be affected if they become extinct. I’ve come away with a new sense of awe for this powerful animal of the ocean.

Click here for more facts about Great White Sharks.  Two thumbs up for Dylan, my student from last year. He’s the one who told me all about cage diving. He came across it while researching South Africa for me. I had never heard about it before. He told me I should definitely  do this. Dylan, you were right!    Watch this video for another visit from a Great White. Climbing back into the boat from the cage.